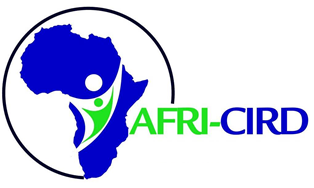 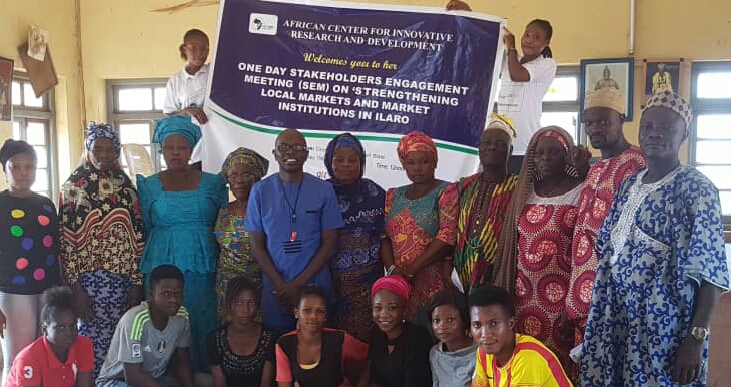 The Pro – Poor Growth and Promotion of Employment in Nigeria (SEDIN) as an initiative of Deutsche fur International Zusammenarbeit (GIZ) aims to increase sustained employment and income generation for the Micro Small and Medium Enterprises (MSMEs) through access to finance and business services, strengthening entrepreneurial and managerial skills, and addressing key barriers in the business and investment climate. The program works at all government levels, with a regional focus on three states; Ogun, Niger and Plateau. Through its work, SEDIN has recognized the crucial role local market plays in supporting the daily life, livelihoods (providing income and employment) and improved welfare (helping to lift people out of poverty) of target groups informing its interest in targeted intervention to strengthen local markets.

In view of this, SEDIN commissioned the study on ‘Strengthening of Local Markets and Market Institutions in Nigeria’ with the aim of identifying the current gaps in local markets and market institutions, and hence design appropriate pilot intervention to strengthen the markets. The study was contracted to the African Center for Innovative Research and Development (AFRI-CIRD) and sought to explore food commodity value chain in two selected markets (one rural and one urban market) in each of Edo, Kaduna, Niger, Ogun, Oyo and Plateau States.

The study was designed to adopt a multi-faceted approach combining secondary reviews and primary data collection using mixed method research in eliciting information strategic for understanding the markets. AFRI-CIRD in consultation with SEDIN team agreed to conduct Stakeholders Engagement Meetings (SEMs) as part of the community entry strategy needed to aid engagement with the market actors for the planned data collection. At SEMs, key stakeholders in the market architecture will be pulled together in a round shop specifically for the following:

1) Introducing the research study, generate more critical opinions on the key players and stakeholders in the strengthening of local markets and market institutions, particularly in the state;

2) Soliciting commitment of the stakeholders, particularly in the markets being surveyed towards ensuring a hitch-free data collection and;

3) Recommendations on how best the planned data collection can be achieved in the selected markets. 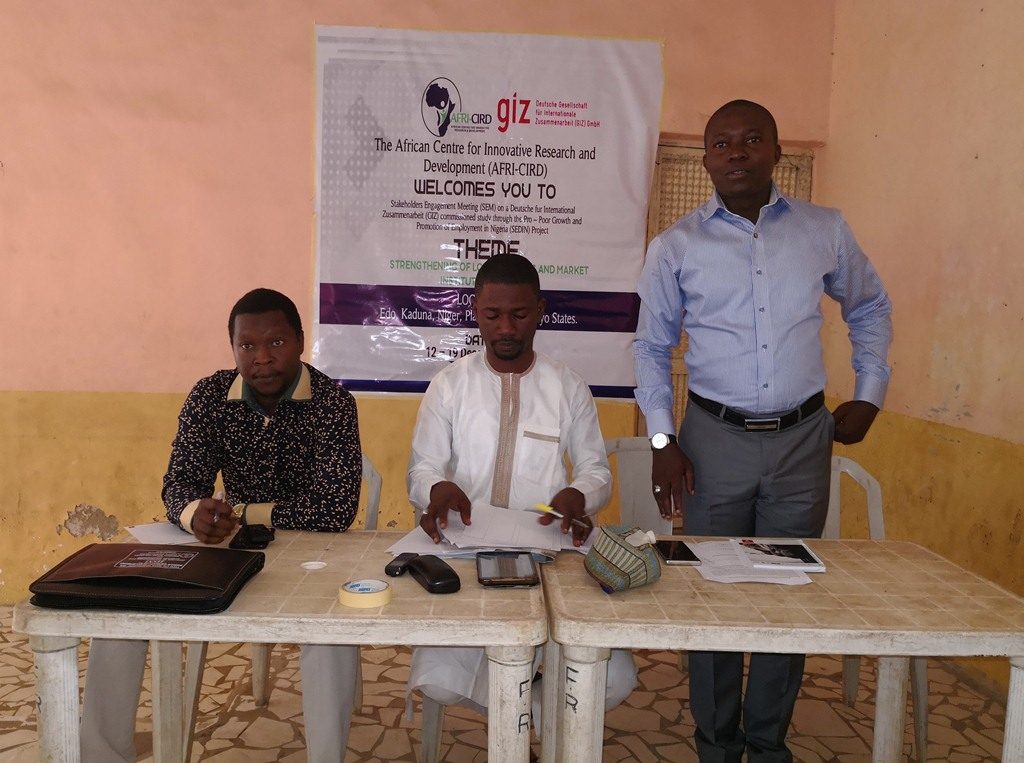 The stakeholders Engagement Meeting (SEM) held between 12th – 19th December 2018 in all the six states where the study will be conducted. However, one of Oyo State (rural) was rescheduled and finally held on the 27th December 2018. Mobilization was done to inform targeted actors for the SEM prior to the selected date in ensuring high turnout. Invitation letters were developed and sent through to the stakeholders at least one week before the SEMs. In total twelve (12) SEMs held across the six (6) states; two (2) – rural and urban held in each of the six (6) states of Edo, Kaduna, Niger, Ogun, Oyo and Plateau. Table 1 below shows the breakdown of the SEMs with disaggregated information on gender, location and markets. In terms of reach, three hundred and seventy-six (376) stakeholders were reached during the SEMs across the six (6) states. With cognizance to gender, one hundred and ninety-five (195) males and one hundred and eighty-one (181) females attended the SEMs across the six (6) states. This represents 52% (males) and 48% (females) respectively. See chart 1 below. 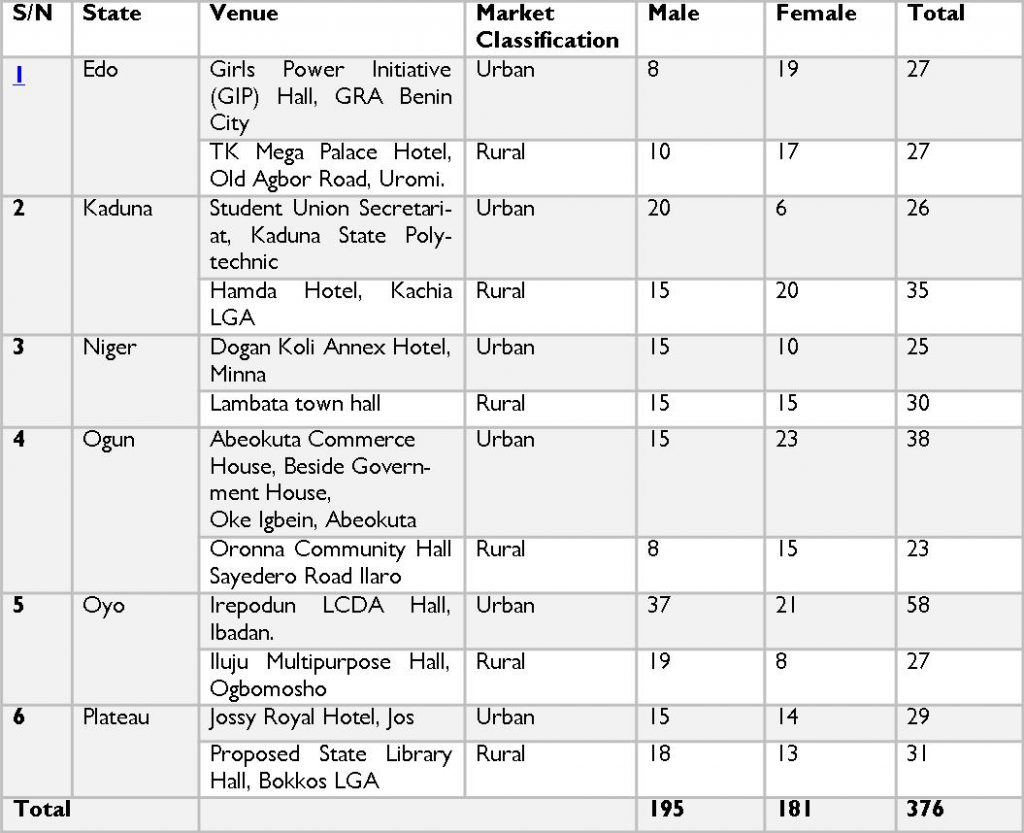 Table 1: Disaggregated data on SEMs conducted across the six states.

Chart 2 above highlights categories of some major stakeholders who attended the SEMs across the six (6) states. 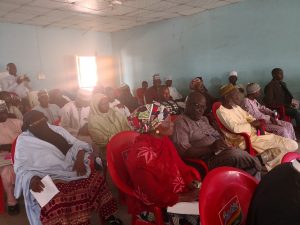 The SEM recorded mass participation from all the anticipated stakeholders in all the centers where it held. Stakeholders present in each of the locations included representatives from government ministries and parastatals, traders and market associations, financial service providers and other actors on the value chains for commodities.

In order to have a more engaging deliberation, the sessions were conducted in the local language of the market communities and provision was also made for interpretation in English for participants that do not understand the local languages. The facilitators for the SEM introduced participants to the project and used the opportunity to conduct a preliminary investigation into the activities and gaps inherent in their local markets and its institutions. The meetings further solicited for inputs from the stakeholders on the best strategy for the data collection, other stakeholders that should be included in the qualitative interviews and support during data collection and validation workshops. 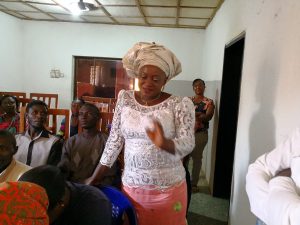 A Deputy Director – Ministry of Commerce, Plateau State during the feedback session at SEM (Urban)

Feedbacks from the SEMs showed mass interest in the research study and the stakeholders were happy to provide insight into some of the thematic questions the study seeks to answer. The market actors also promised to support and mobilize their members to cooperate during the field exercise and validation workshops. Emerging Issues from the Stakeholders Engagement Meetings include:

♦ Poor organization and documentation of members of various market associations/cooperatives.

♦ Irregularities on the standard unit or scale of measurements which varies across the traders. This often degenerate to price variation and subsequent exploitation of the consumers/buyers.

♦ Price fluctuations in commodity prices which is attributable to seasonality of products and a poor/non-existent storage system that creates excess supply.

♦ Uncoordinated local market associations and skewed leaderships that are mostly driven by political interest from the top.

♦ Mistrust among market members on the governance and accountability mechanism of its market union leaders.

♦ Bad roads and poor transportation system that impact on distribution of commodities from farms to markets.

♦ Mistrust among market actors on remittance of taxes by appropriate authorities.

♦ Inadequate financial services (institutions) particularly at the rural markets to ensure access to capital and promote a saving culture.

♦ Multiple taxes and levies are still be reported in urban markets.

♦ Inability to trust some financial institutions (Microfinance) that have been promising to grant loan facilities after mobilizing savings from the local traders.

♦ Perceived ineptitude from government to their demands.

Strengths of the Market Institutions

♦ Existence of market associations that guides and regulates market activities including settlement of disputes among members.

♦ Collaborations with ‘sister’ organizations in seeking external support and interventions in certain areas.

♦ Pockets of savings and financial activities with both formal and informal financial institutions.

♦ Openness to capacity building and other donor interventions.

As stated in the timeline of activities, there was a break in December 2018 which commenced from 23rd December 2018 – 2nd January 2019. Researchers training which is the first activity of the year is planned as scheduled in the work plan. This will then be followed by intensive two weeks data collection. The qualitative interviews will also be conducted in the same period and other relevant stakeholders identified during the SEMs will also be included for participation. With the effort and support we have gotten so far, we believe we will be able to deliver the project as outlined in the timeline.

Some photographs at the meeting 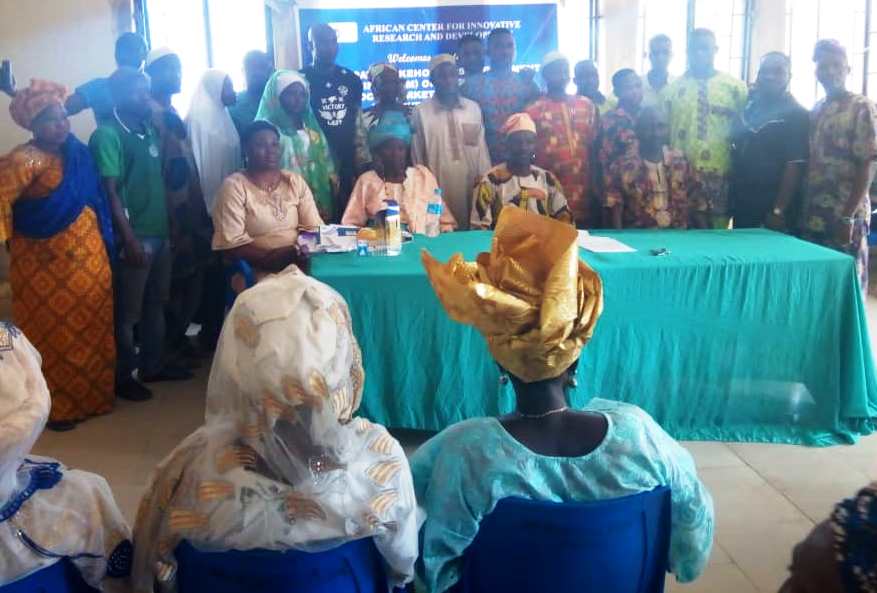 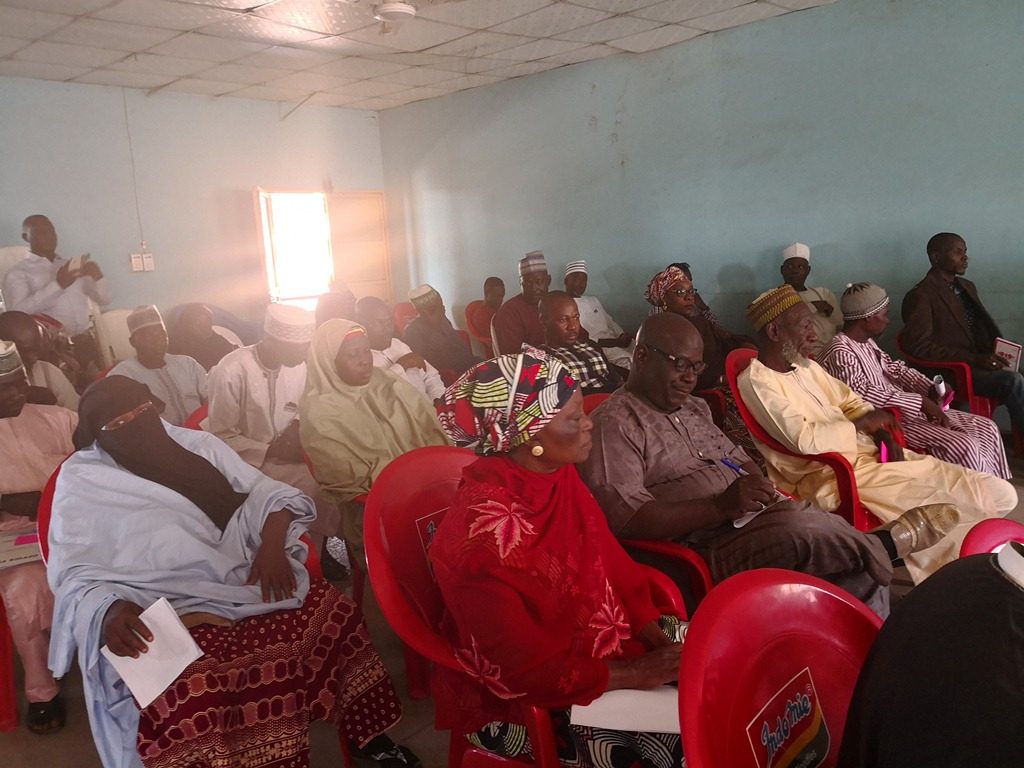 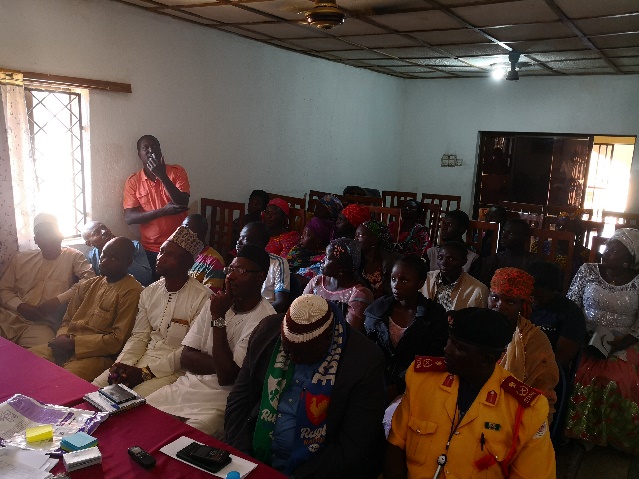 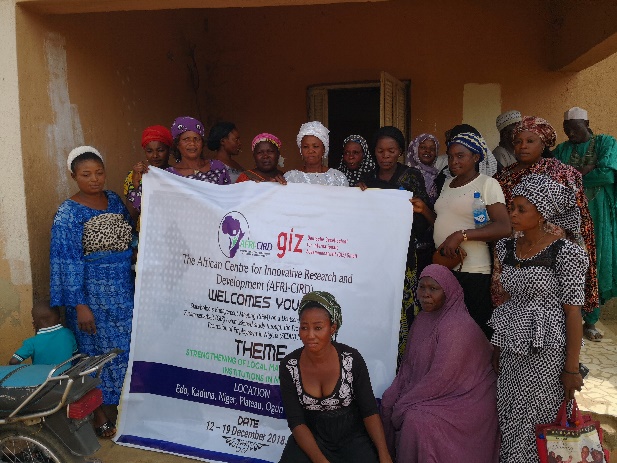 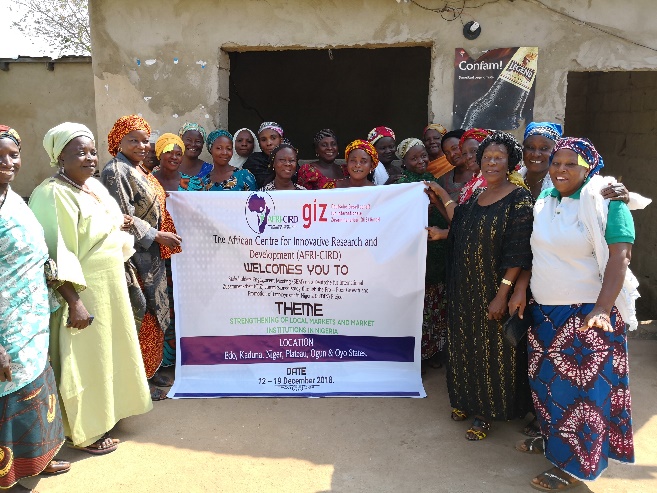 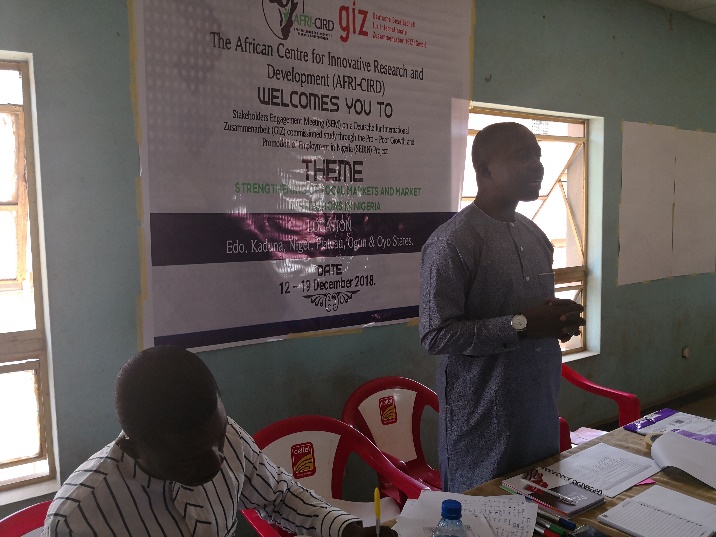 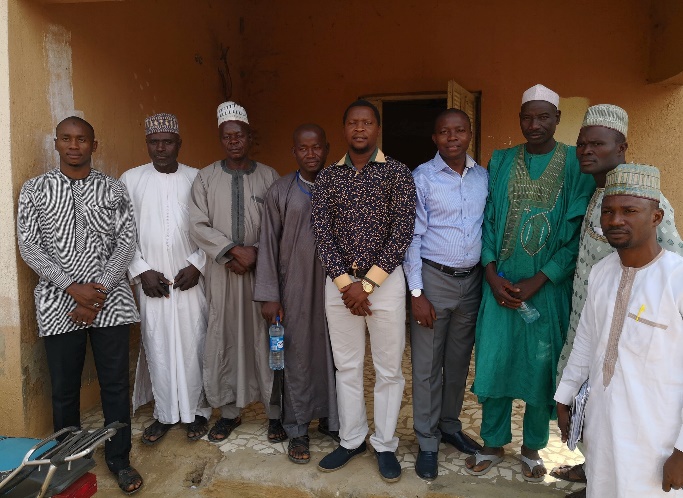 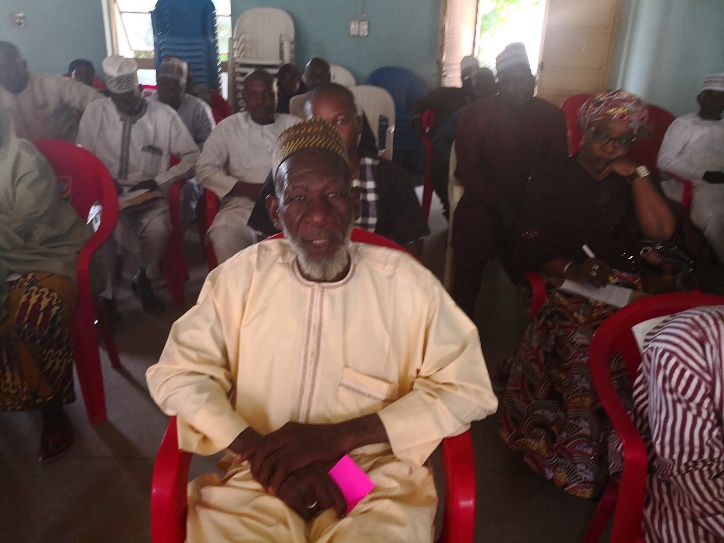 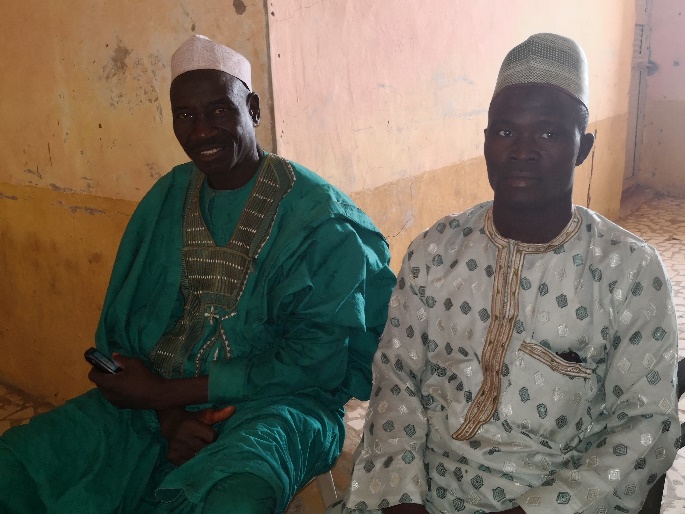 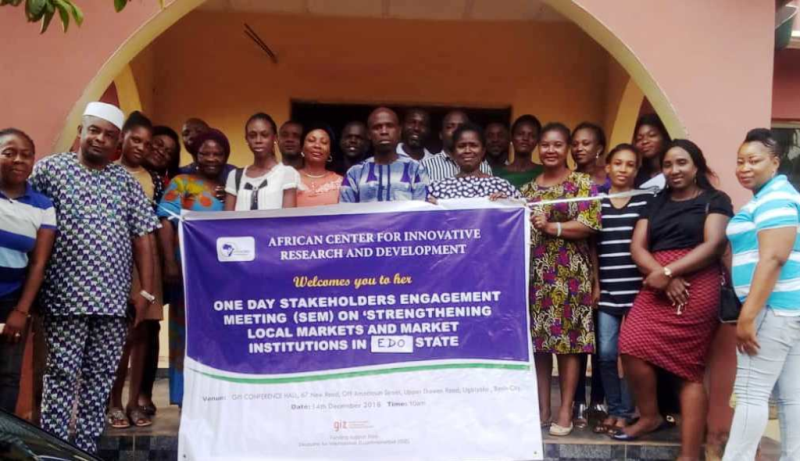 Group picture of stakeholders after the Edo SEM